Founded by the Lutzelhardts, a vassal family of the Dukes of Lorraine, the castle, linked to the confessional of the Cistercian abbey of Sturzelbronn, controlled the route between the properties of the Dukes of Lorraine and those of the Hohenstaufens. At the end of the 13th century, it passed to the Deux-Ponts, as did the seigniory of Bitche, then to the Fleckensteins. The castle is noted as ruined from the 16th century and then destroyed during the Thirty Years’ War.

The death of Jacques de Deux-Ponts-Bitche led to quarrels between his heirs. The forests around Bitche were then marked out with milestones demarcating the territory of the Duchy of Lorraine and those of the seigniory of Hanau-Lichtenberg. For political reasons, the Duke of Lorraine decided to assign the castle (already ruined) to the Count of Hanau-Lichtenberg, in order to better recover the lands of the seigniory of Bitche.

Perched on its vertiginous rock, the castle is a semi-troglodyte construction, which follows the relief of the natural site and, when viewed, offers the romantic image of a ruin worthy of a fantastic medieval film.

Access
From Obersteinbach, follow the D3 towards Bitche. After about 2 km, at the third bend, park your vehicle in the car park on the right. Follow the path marked by a yellow rectangle then a red diamond, or the signs for the Fortified Castles’ Trail.
Walk time from car park
20 min
Nearest tourism office
Office de tourisme Sauer-Pechelbronn
2 route de Bitche, 67510 Lembach
03 88 86 71 45 - info@tourisme-nordalsace.fr
www.tourisme-nordalsace.fr - Facebook @sauerpechelbronn
GPS coordinates
Lat.: 49.04552497 - Long.: 7.65535176

Standing at the top of a rocky ridge at an altitude of 480 m, the castle overlooks the Zorn valley... 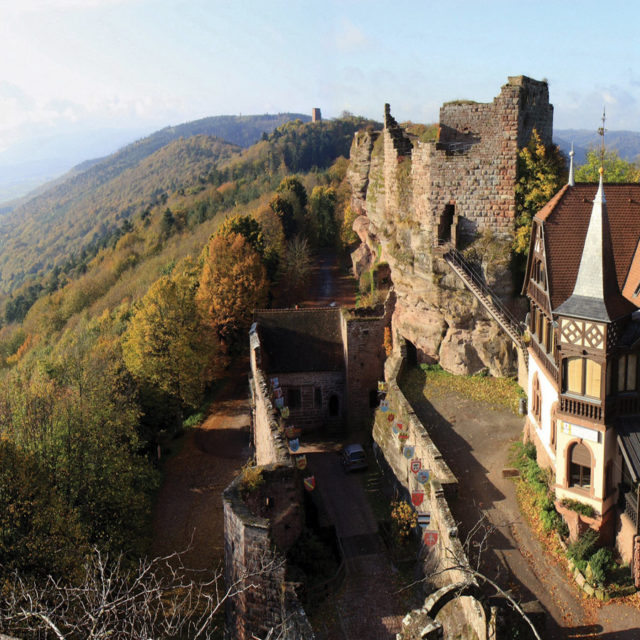 Perched at 470 m on the hills of Saverne, ‘the eye of Alsace’ owes its nickname to the extraordinary view...

Solidly embedded in the rock at an altitude of more than 400 m and in the heart of a lush...